Interim Stolen Property wax mooshen’ ‘n kindly removing program from attender’s ergo, the agent returned unexpectedly, permanently so. Perfectly logical assumption that any repressive government needs its own share of transvestite discipliners in denial. Texas Jim weren’t happy. As Couscous Ali Kay, he had opposed (and effectively delayed) any kind of bill to promote the literacy of colored people. Order this back not do. As Mrs Coo-Coo K, he had published such landmarks of black-hole literature as “Hendbuk fer literasation ‘f the blak Pholk” or “Why picture books are far better than manuals when training da peasants.”

Sincerely, he couldn’t think of a single reason to give that young man the money he was asking for. However, “People” would probably respect, internally at least, a president supporting underground artists in need.

–          Okay, Mister Interior, come back on Monday and the Secret Minister of Defense and Terror will have your money ready. Your movie will be made!

He slammed his fist on the table as if to underline these last few words. 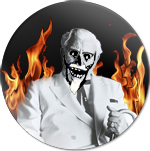